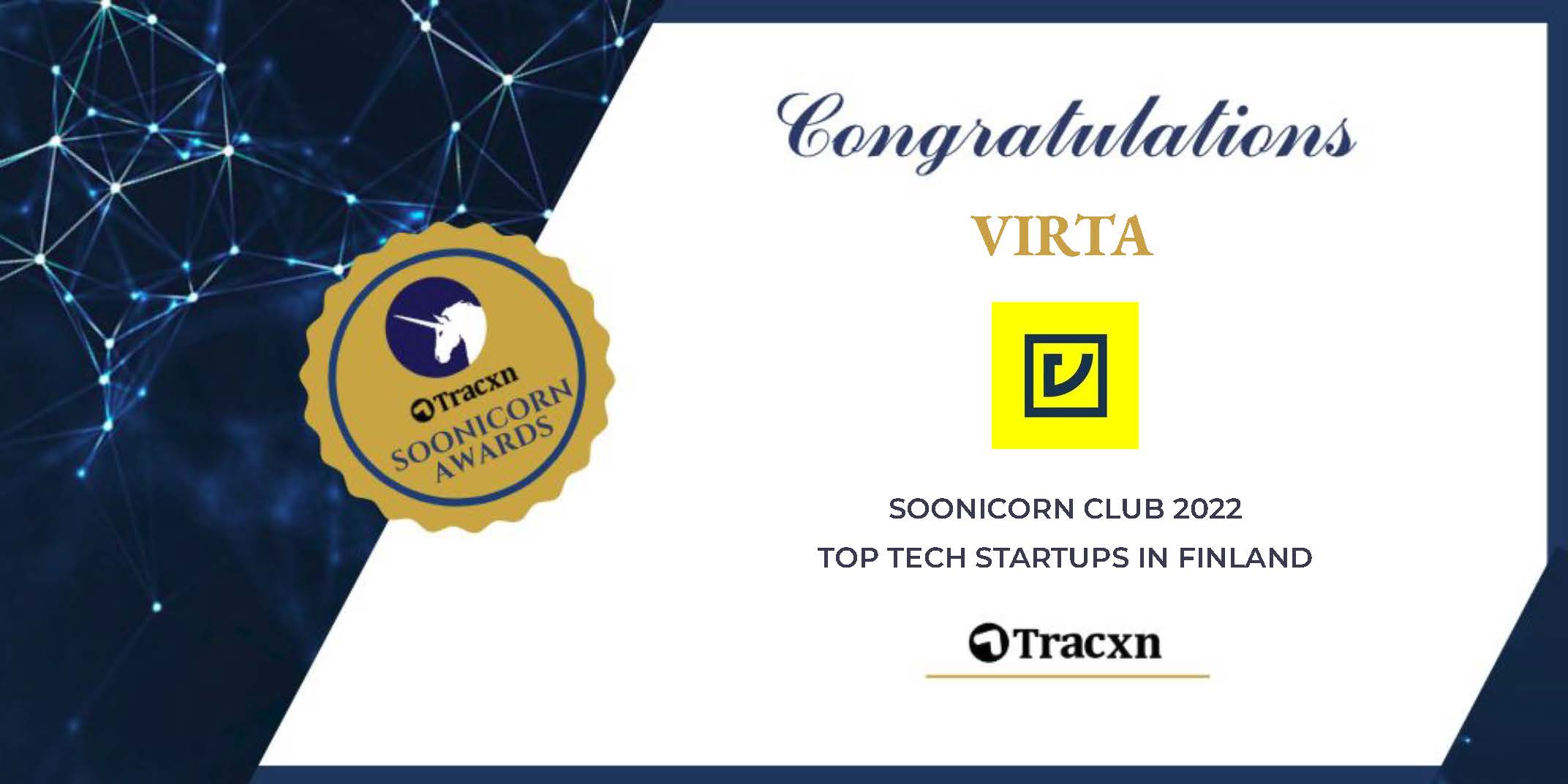 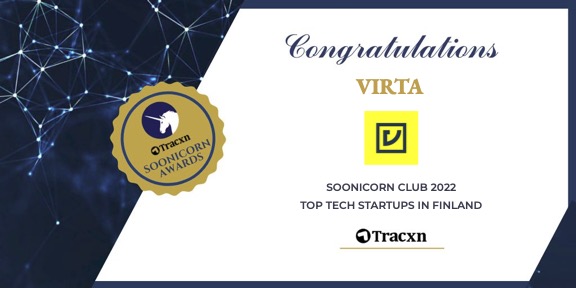 The Soonicorns - soon-to-be Unicorns - are the most promising tech start-ups in Finland that have reached significant valuation milestones over the previous few years.

As a Soonicorn in Tracxn’s Soonicorn Club of Finland Tech 2022, Virta is showcased in the exclusive list of tech start-ups with valuations of over a few hundred millions and good chances of soon becoming Unicorns.

“The Virta platform is already today used to operate more than quarter billion worth of electric vehicle charging infrastructure and the segment is in hypergrowth, so this nomination makes sense,” says Jussi Palola, CEO & Co-Founder of Virta.

With an 84% faster growth rate than the market, Virta is one of the biggest and fastest-growing electric vehicle (EV) charging platforms in Europe. The company has featured three consecutive years on the Financial Times 1000 ranking of Europe’s fastest growing companies.

The Tracxn Soonicorn Club publicly recognizes high potential and high growth companies across different geographies and sectors. Other Soonicorns who made the Soonicorn Club of Finland list this year include Supermetrics, Swappie, and Whim. In addition to Soonicorns, Tracxn also identifies Unicorns (companies with over $1 billion valuation) and Minicorns (early-stage companies that have the potential to be Unicorns in the long term).

Companies in the Soonicorn Club are handpicked based on a detailed analysis by Tracxn’s internal sector specialist teams, in addition to publicly available signals such as market size, investment by marquee investors, execution excellence, and future growth prospects.

Virta is a global leader of EV charging platform technologies. We offer the world’s fastest and most cost-effective channel to launch, scale, and operate commercial services in this EV charging ecosystem—as a primary business or as a value-added service. Our award-winning digital platform connects all of the key players in the electric vehicle ecosystem and provides services for the entire value chain.

Founded in 2013, Virta operates in over 30 countries and helps over 500 partners to offer EV charging services to EV drivers in total over 54 000 Charging points, and through roaming in close to 200 000 charging points (April 2022).

Virta has over 19 patent families, including trailblazing bi-directional charging technologies, and is the forerunner also in technological development measured by patents relative to investments in the company. Since January 2022, Virta has also operated in Asia-Pacific markets from its Singapore office.

Founded in 2013 by ex-Venture Capitalists, Tracxn is one of the world’s largest platforms for tracking startups and private companies spread across 1800+feeds and multiple countries. It is powered by a unique combination of human analysts and technology that scans through multiple data points to build one of the most relevant data intelligence platforms.

Backed by investors such as Accel Partners and Sequoia, Tracxn currently has subscribers in 50+ countries across the world. Our clientele includes VCs, PE Funds, M&A and Innovation teams of Fortune 500 companies and Investment Banks who use Tracxn data for daily deal sourcing, identifying M&A targets, deal diligence and tracking emerging themes across Industries & Markets.