In this guide, we’ll serve you all the latest facts, figures, and forecasts you need to know about the EV market and its predicted growth 👇

The global electric vehicle market has taken a huge leap forward in the past decade. But even though we’ve already seen some incredible growth in the number of EVs worldwide, industry predictions would suggest that we’ve only just scratched the surface.

Let's start by looking at some historical data about the development of the global EV market.

The reasons for this shift are due to the decrease in sales in the second half of 2019 in the two largest markets, China and the USA.

But even with the stagnant growth in the two largest markets, global EV sales still grew, largely in part to Europe, which saw 44% growth. This could be attributed to the introduction of WLTP, along with changes in national vehicle taxation and grants.

In 2019, Europe secured €60 billion in investments to produce EVs and batteries - 19 times more than in 2018. Driven by EU car CO2 targets, industry and governments committed 3.5 times more to EV and battery production in Europe than they did in China.

Amid COVID-19, the outlook for 2020 global EV sales becomes more difficult. The preliminary EV sales data for January and February is very positive in Europe, encouraging in the USA, but dismal in China, where the total vehicle market was down 80% in February. If quarantines and factory closures continue into Q2, insufficient parts supply affects the global car industry during a longer period.

While the direction is right, it’s good to keep in mind that as of 2019, only 2.5% of the world’s passenger vehicles run on electricity. This would suggest that we still have a long road ahead until we can declare electrification a reality. 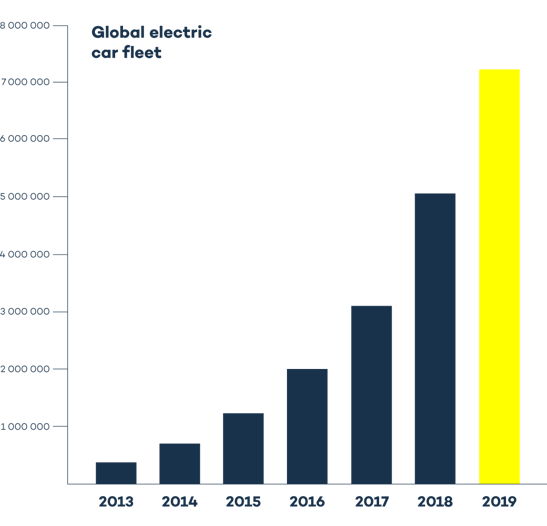 In absolute terms, China remained the world’s largest EV market, with 2.3 million electric vehicles in active use. To put that into perspective, that’s nearly half (45%) of the global stock of EVs. Europe and the US are relatively far behind with 1.2 and 1.1 million EVs respectively. 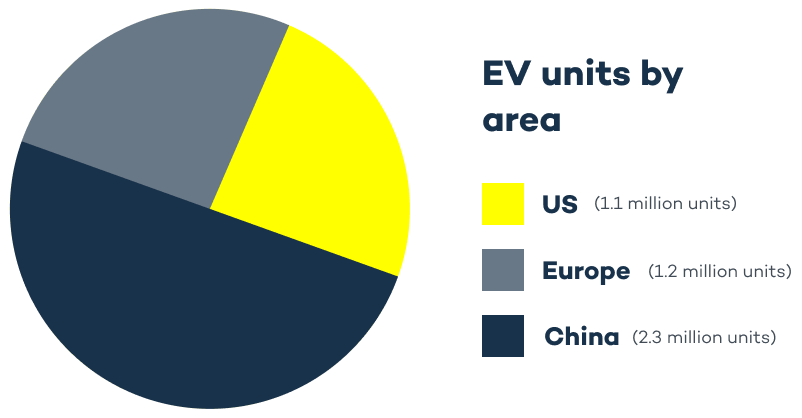 But when it comes to relative terms, the situation in Europe is looking a lot more positive. While only 5.2% of China’s vehicles are electric, Norway has  56% of its vehicles running on electricity in 2019.

The runners up Iceland and Netherlands have reached 25.5% and 15% EV penetration, respectively.

Overall, the country by country development of EV sales and market share can be conveniently viewed in the graph below. 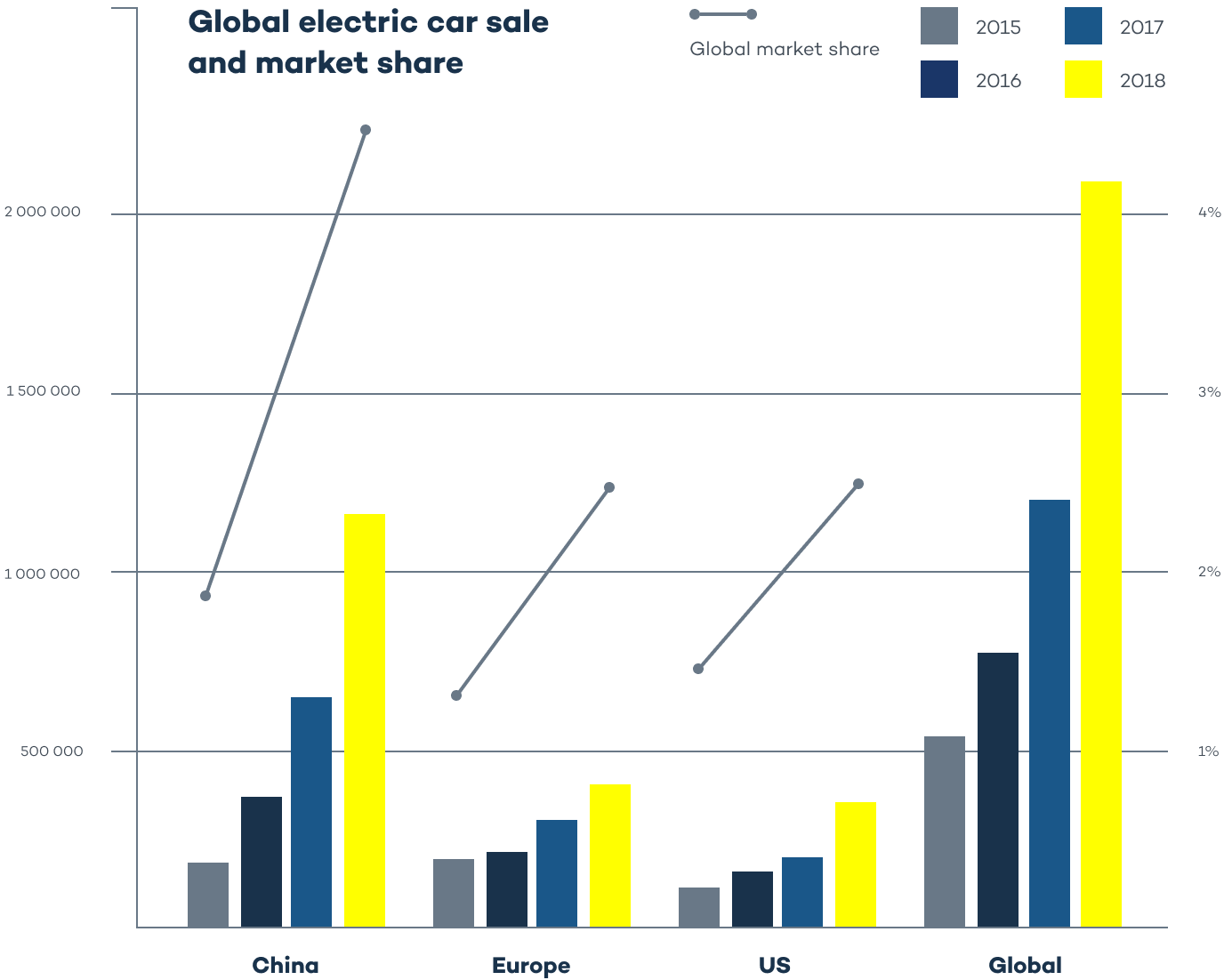 3. The state of other electric vehicles

While passenger cars typically get all the credit for the EV revolution, it’s good to also consider the other forms of transportation that are gradually becoming greener.

For example, as of 2018, China has been the home to 5 million low-speed electric vehicles (LSEVs). These vehicle types include, for instance, microcars that are relatively popular in China.

Another interesting EV trend in 2020 relates to public transportation and the sharing economy. Electric micromobility options have expanded rapidly since their emergence in 2017. Shared electric scooters (e-scooters), electric-assist bicycles (e-bikes) and electric mopeds now available in over 600 cities across more than 50 countries worldwide. An estimated 350 million electric two/three-wheelers make up 25% of all two/three-wheelers in circulation worldwide. The majority of these are in China, driven by bans in many Chinese cities on two-wheelers with internal combustion engines.

In freight transportation, on the other hand, light-commercial EVs (LCEs) reached 380 000 units in 2019, which is great news for the future of commercial trucking.

The global stock of electric buses in 2018 was 460 000, almost 100 000 vehicles more than in 2017. In addition to China, one of the global leaders in electric bus fleets is Chile, aiming to electrify all of its public transport by 2040. In European Union countries, a new Clean Vehicles Directive also provides a public procurement of electric buses.

4. The state of EV charging

At the end of 2019, there were about 7.3 million chargers worldwide, 2.1 million more than in 2018. About 6.5 million of the chargers were private, light-duty vehicle slow chargers. In other words, private home and workplace charging with type 1 and type 2 slow chargers continue to be the preferred mode of charging for the general public.

In Europe, 76% of all charging points are concentrated in just 4 countries: The Netherlands, Germany, France, and the UK.

Fast chargers, on the other hand, are slowly increasing in popularity. In 2019, there were about 598 000 fast chargers in the world, 82% of which were in China. In Europe and the United States, a large majority of publicly accessible chargers that were installed in 2019 were slow chargers. However, this situation will likely change in the coming years, as several projects focused on ultra-fast charging have already been announced in Europe.

A third trend that’s steadily increasing in the EV space is the smart charging of electric vehicles, i.e. the use of cloud-connected charging devices. For business owners and consumers alike, smart EV charging allows greater convenience and control over electricity consumption.

Lastly, you can't mention EV charging trends without acknowledging vehicle-to-grid (V2G). V2G technology enables electricity to be returned to the grid from car batteries, the same way stationary storages are connected to the grid. V2G services are already commercially available and several charger manufacturers are able to supply V2G chargers.

The V2G market is projected to grow to over $ 5 billion between  2020-2024. The European standard for V2G charging will be ready in late 2020. Virta has been recognised as one of the global leaders in V2G technology.  You can learn more about bi-directional charging and our V2G solution by reading this quick guide.

Psst! Get a quick Master's Degree in smart charging

If you're interested in learning more about smart charging (including the definition, benefits, practical how-tos, and more), take a look at our complete guide.
Read more

Another interesting perspective relates to the development of new EV parts and charging technologies.

For example, while recent developments in battery characteristics are driven by a high demand for batteries in consumer electronics, the EV business will undoubtedly benefit from this. For the EV market, further technological advances include:

Ultimately, these changes will lead to massive cost reductions and increased production efficiency.

Speaking of efficiency, several manufacturing plants have released their plans of expanding their EV production capacity as a result of increased policy support. This is, of course, good news for the market at large, since it means that the supply of EVs will be able to catch up with the demand.

And if that wasn’t enough, we’re also working on some pretty exciting new stuff here at Virta. For example, our proprietary Plug&Charge feature allows our customers to identify themselves directly by connecting their vehicle to a charger. No pin codes, RFID tags, or credit cards necessary. Unfortunately, currently, the only car supporting the Plug&Charge technology at the market is Smart.

6. The environmental impact of EVs

Altogether EVs consumed approximately 80 terawatt-hours of electricity in 2019, a large proportion of which can be attributed to two-wheelers in China. Overall, China accounts for 80% of the world electricity demand for EVs.

Fun fact: 80 terawatt-hours is somewhat comparable to the electricity demand of Finland in 2019.

During the year, EVs emitted 38 million tonnes of carbon-dioxide equivalent on a well-to-wheel basis. Compare that to the 78 million tonnes an equivalent ICE fleet would have emitted. In practice, all emissions from EVs are born as a result of the manufacturing process, whereas a similar logic can’t be applied to ICE cars. In the grand scheme of things, it seems safe to conclude that the public debate over EVs vs. ICE cars environmental impact is slowly turning in the favor of EVs.

While it’s true that EVs increase electricity consumption, that can become the saving grace of energy utilities in the future. By the 2040s, electric vehicles will add up to over 30 TWh of installed battery storage capacity. For utilities, this means that EVs offer cheap energy storage, win no capital cost and relatively low operating costs.

It’s no secret that governmental and local policies play a huge role in the adoption of EVs. Now, let’s look at some of the most effective EV-related policies from around the world. 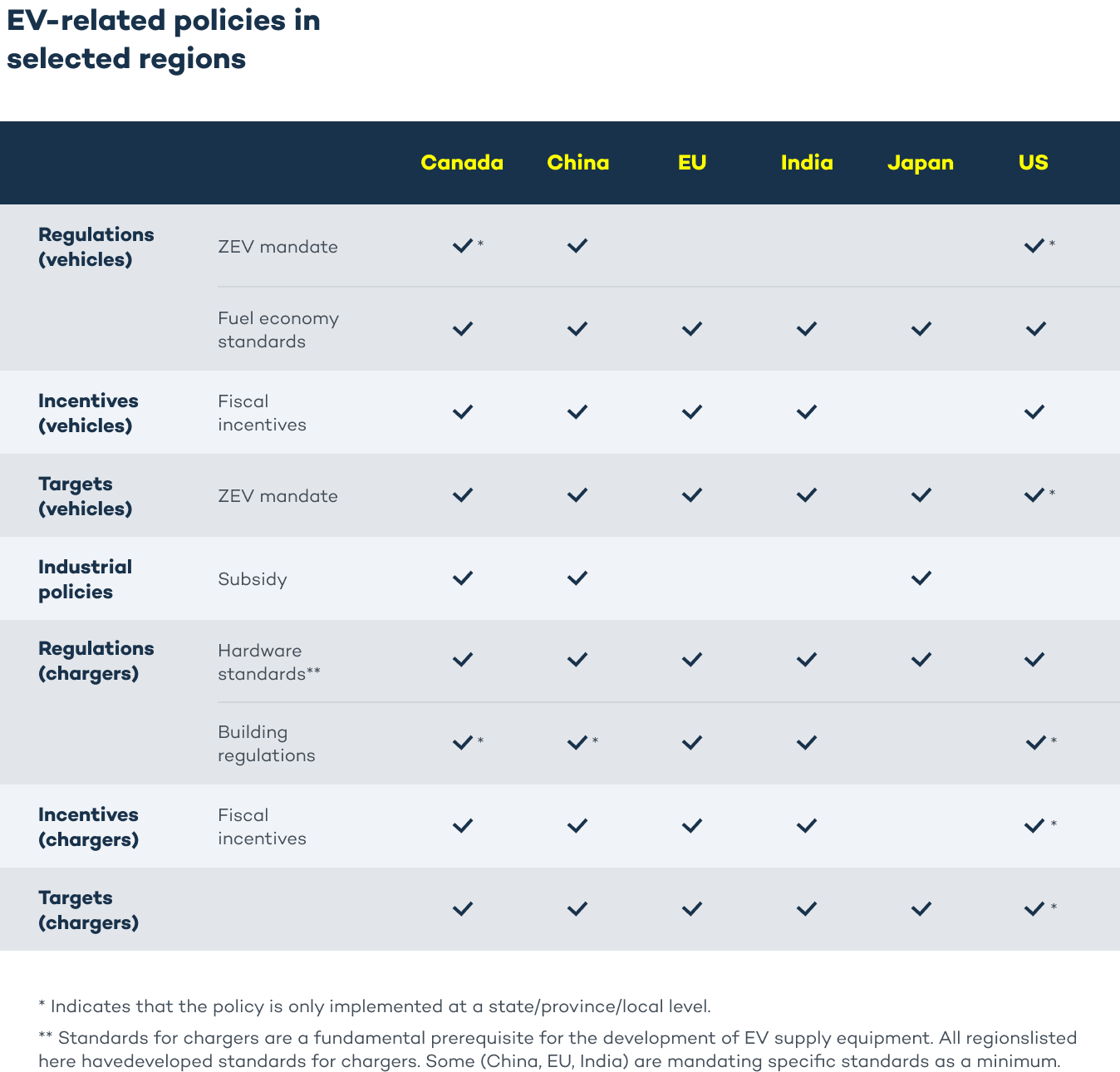 Judging from the table, it should be only a matter of time until the rest of the developed world catches up.

8. The private sector’s response to EVs

The private sector, and car manufacturers, in particular, have primarily responded positively to the ongoing changes in the market. For example, Volkswagen has recently taken a strong stance towards electrifying the car market, and many Japanese, American, and European manufacturers are following suit.

On the other hand, utilities and power companies are currently increasing their investment in EV charging infrastructure.

On the fleet side, DHL has made an ambitious pledge to reach 70% clean operations of last-mile pick-ups and deliveries by 2025. And DB Schenker wants to make its transport activities in European cities emission-free by 2030.

And while actions like these are worthy of attention on their own, their fringe benefit is of course that they act as signalling devices for the rest of the market. In other words, it is public pledges like these that pressure competitors and stakeholders to act faster than they otherwise would have.

When it comes to the future, according to the EV Market Outlook 2020, there are two possible scenarios:

While only time (and new data) will tell which of these predictions will be closer to the truth, if you’re interested in familiarizing yourself with more